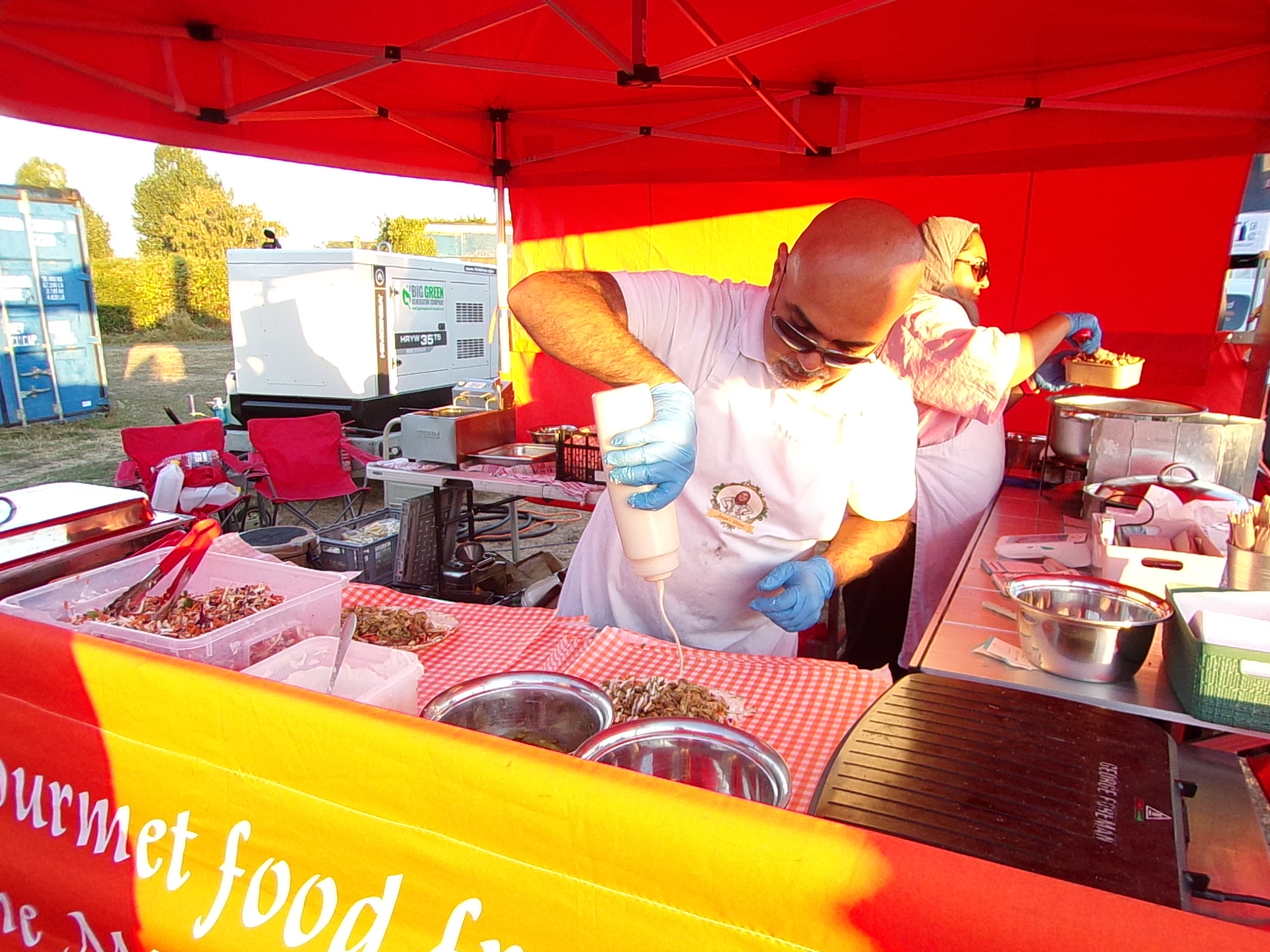 Up Close with Amani Kitchen. PICTURE: When she is happy, I am happy” says husband Amir with Amani behind him during a busy evening in Hitchin. CREDIT: George Bigley/Nub News 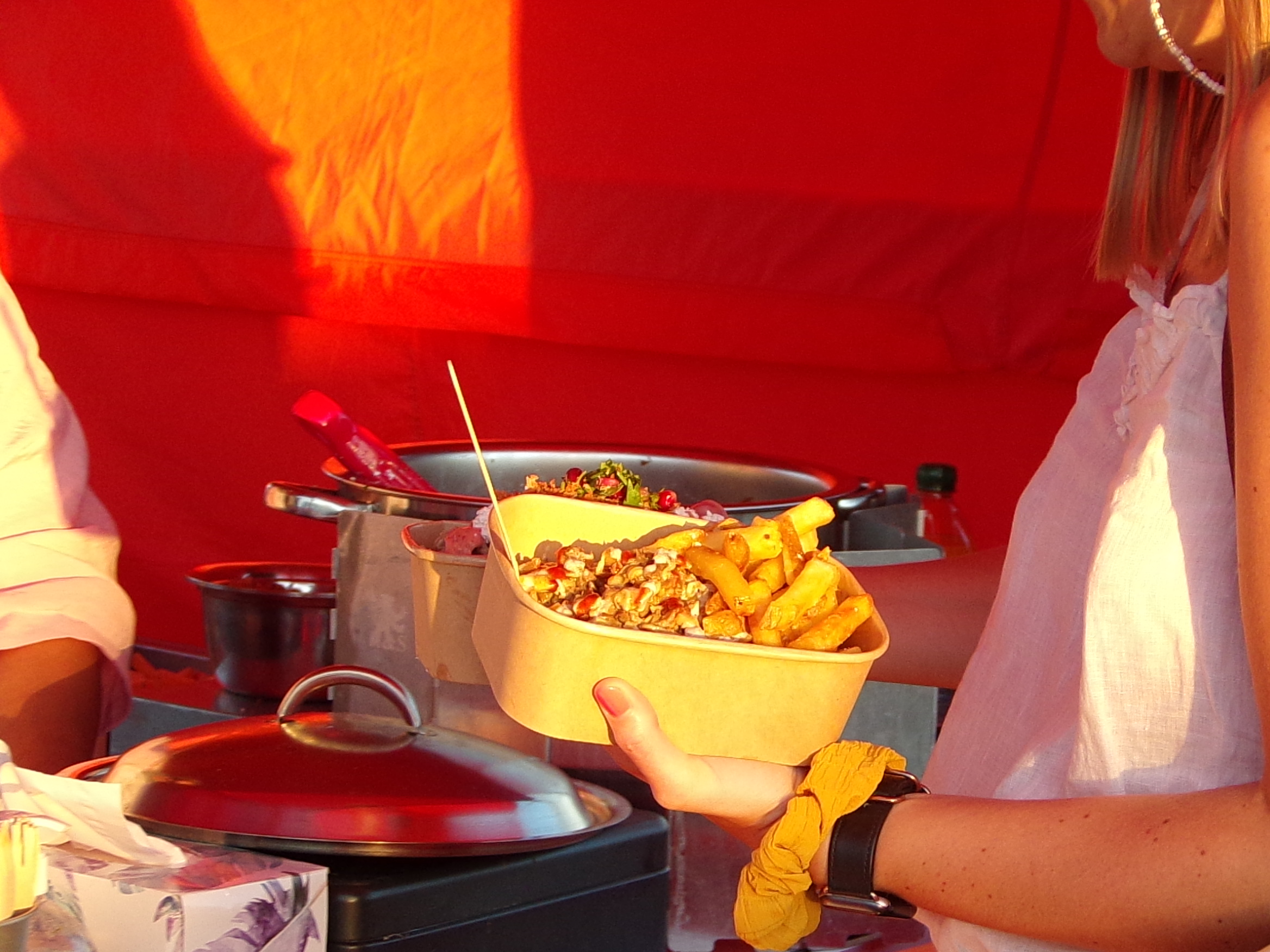 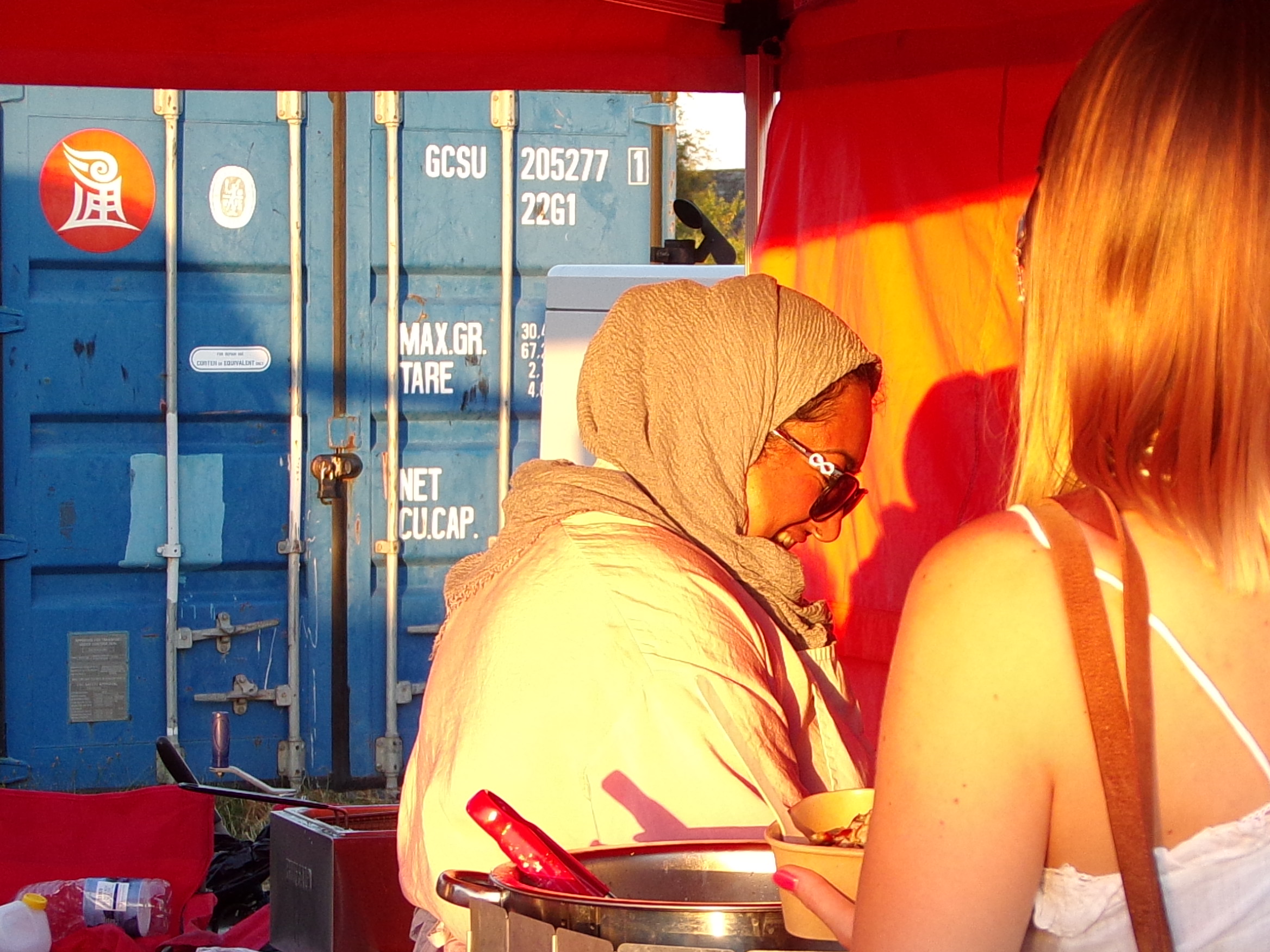 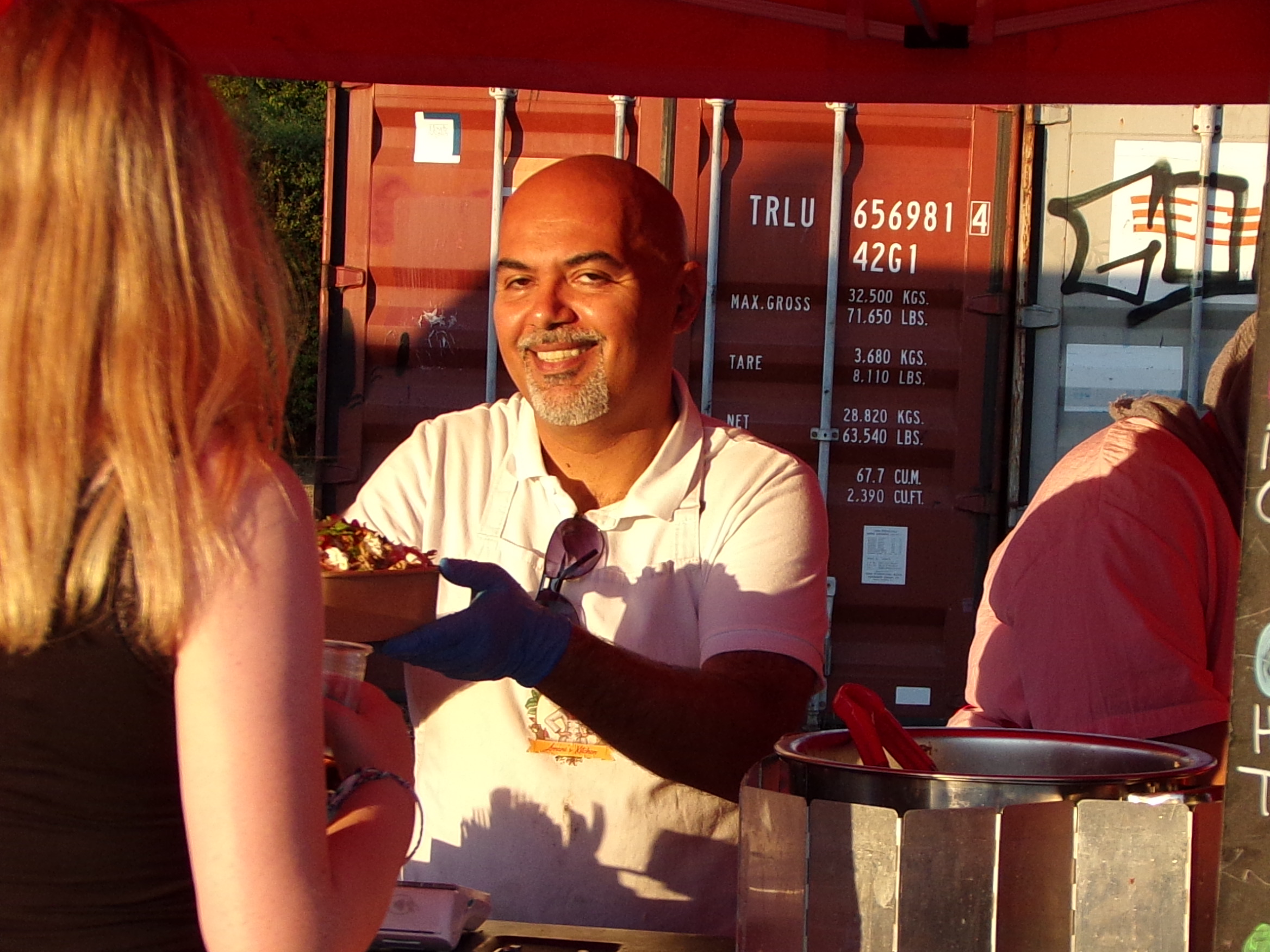 So, read on for our Nub News food correspondent Deven Thakeria's outstanding Up Close portrait feature on a thriving local business.

Frying a mountain of chips, providing an interview and giving her husband orders on the phone that balances on her shoulders - meet Amani, once an accountant and now angling Hertfordshire's hunger to the wonders of Iraqi street food, writes Deven Thakeria.

Amani and her family have been Hitchin locals since 1999. We speak during a recent food, drink and music festival based around sport in our town.

Despite having a long queue of hungry punters snaking back from the brightly coloured Amani food stall, she happily shares her passion with Nub News.

"When we visited cousins who were living in Hitchin we fell in love with the town straight away," good-natured Amani explained, while serving succulent her Middle Eastern fayre. 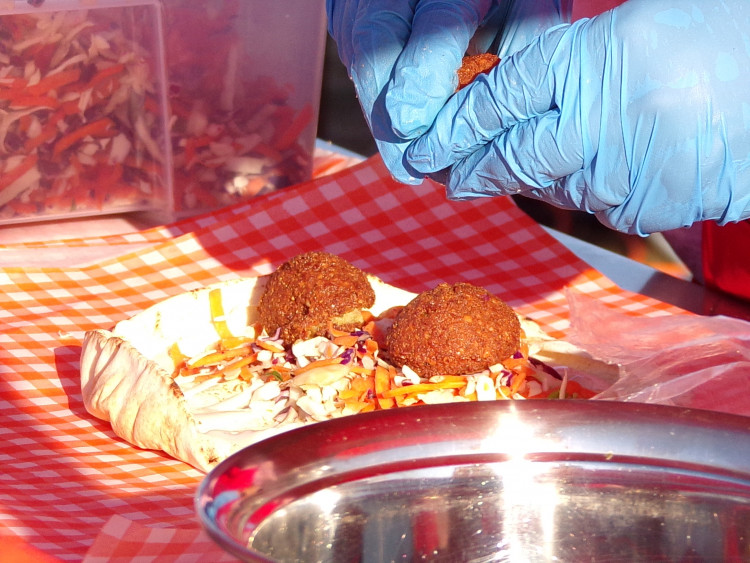 When asked about how the culinary journey started, her eyes lit up and hands animated as she described the kitchen pantry; a playground for her imagination. "I would see myself making and serving food since I was a child. Finally in 2019 I made it happen. Then Covid hit us."

Amani's passions found other paths during the testing times we all faced during the pandemic.

"My husband is an A&E doctor and during the first Covid lockdown I provided food for NHS staff at the hospital. When friends and neighbours found out about this they wanted to contribute".

Since the lifting of lockdown, Amani has been a regular at Hitchin's Street Food Monthly, as well as pop-up events and festivals. The menu at festivals is kept simple to deal with the busy crowds. Chicken shawarma, lamb loaded fries and falafel wraps is on the menu today. During our conversation many customers have been ordering the lamb loaded fries.

"We ordered 40kg of lamb that is cooked with herbs and spices for several hours," busy Amani explains. "Then the meat is pulled off as shreds, which takes a long time."

The bed of crisp golden fries gets loaded with a heap of the pulled lamb which is then topped with swirls of harrisa and garlic sauce for that tingling heat, soothed with tahini, creamy crumbled feta and bursts of sweet and sour from the jewels of pomegranate, Amani says.

At regular events Amani's talents flourish even further. "I make saffron chicken and rice with pistachio and barberries." With a slight sigh as she glances at the prospect of the packing up and unpacking again for tomorrow, she adds "One day I want a food truck, and even invite people to mine for supper clubs".

By now husband and sous chef Amir is also under the sweltering gazebo while Amani's mother is babysitting their two children. "When she is happy, I am happy" says Amir as they share a comforting look. 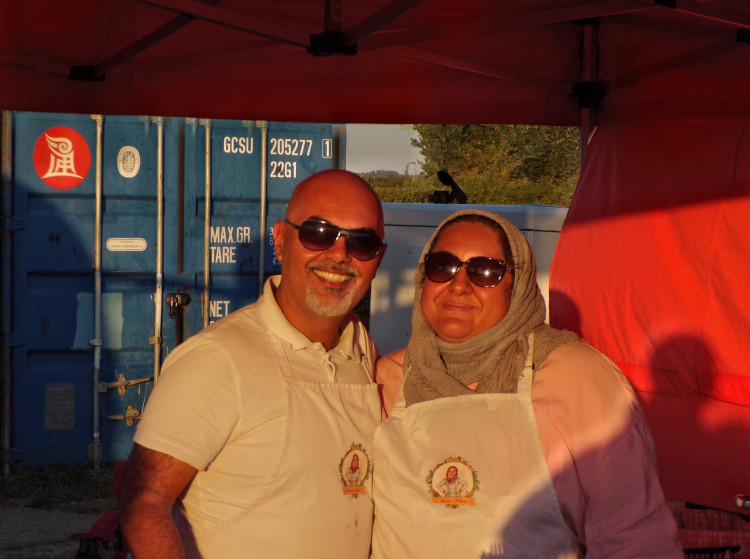 PICTURE: When she is happy, I am happy" says NHS doctor husband Amir with Amani next to him during a busy evening in Hitchin. CREDIT: George Bigley/Nub News

Throughout the busy trade at the festival, the couple give each other pats on the back, pecks on the cheek and even the occasional squabble to add a little more spice. On the subject of spice, Amani mentions that she gets the best spices possible when they visit Jordan. "This is the only safe place to meet our family from Iraq."

In the short time spent with Amani it was clear to see her not only as an expression of Middle Eastern cuisine, but also glimpses of a mother, wife, daughter, and a playful child fulfilling her own dreams in a place she feels at home in. 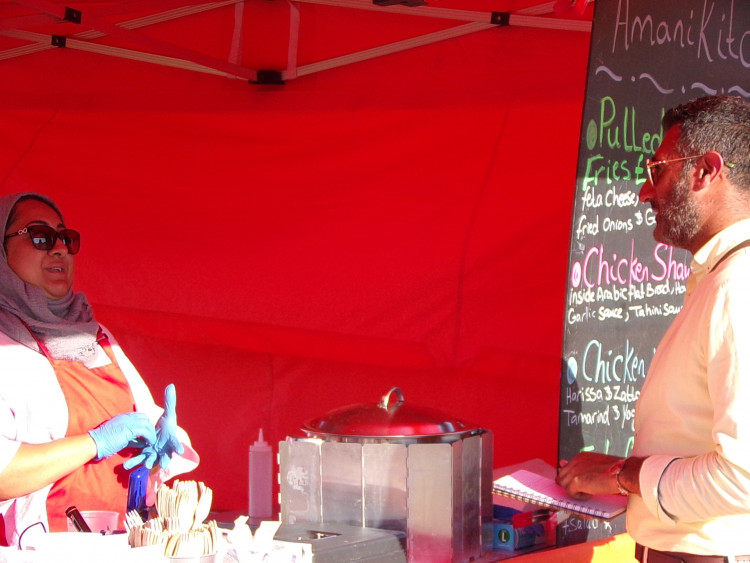